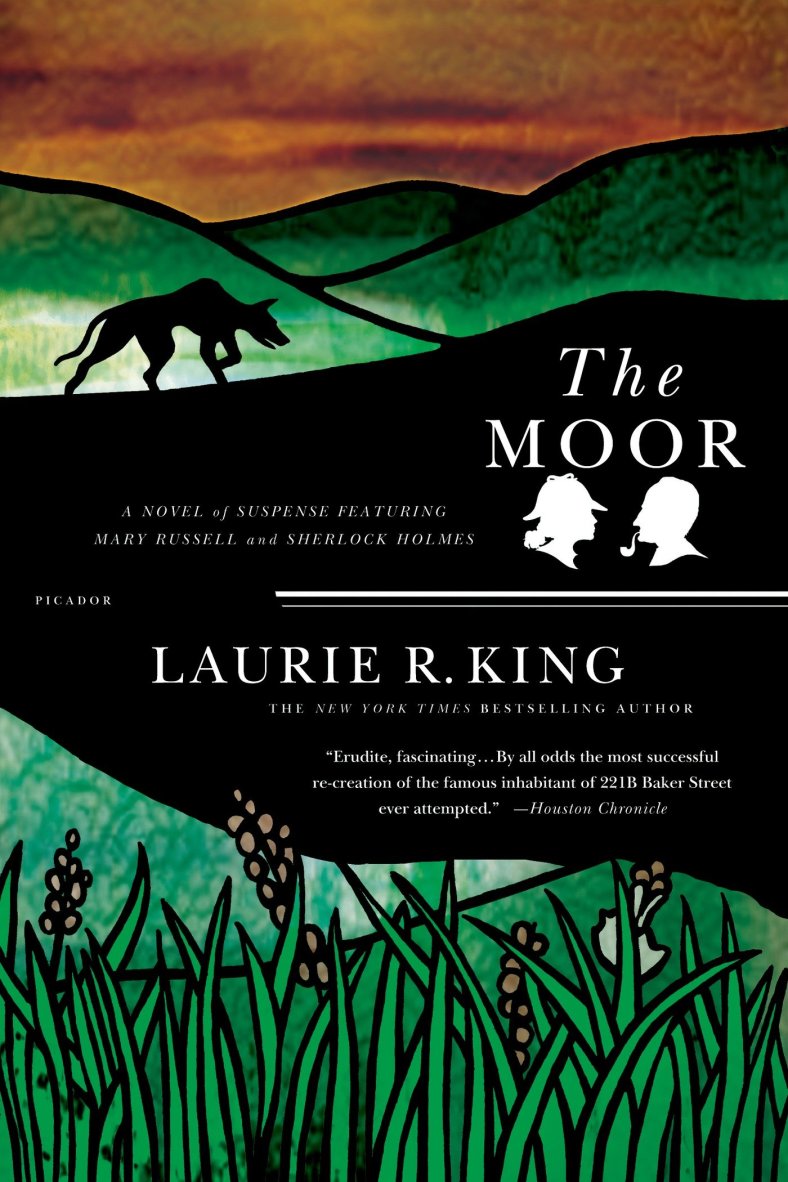 In this, the fourth book about Mary Russell and her relationship with Sherlock Holmes, the main character is neither Mary nor Sherlock but the louring presence of Dartmoor, which clings to this novel like fog on wool.

Laurie R, King’s prose is vivid and memorable helping me to experience the desolation of Dartmoor in winter. This is how she describes a trudge across the moor by Mary and Holmes:

“A meandering ridge on an approaching hill resembling the work of some huge prehistoric mole, became, on closer examination, an ancient stone wall nearly subsumed by the slow encroachment of the turf. A distance sweep of russet across a hillside, a scurf of firs and dying bracken and fern was cut by the dark of another ancient wall drawn along its side.

It was I supposed, picturesque enough, given the limited pallet of  drab colours, but as a piece of impressionist art it served to evoke only the disagreeable feelings of restlessness, melancholia and a faint thread of menace.”

As the trudge across the damp turf continues we see its impact on the spirit:

“By midday I was as grey and silent as anything else in that bleak place; edgy, with an unidentifiable sense of waiting and aching for a spot of colour.”

But the novel is not all atmosphere. There is a strong and ingenious plot, stronger, I think than that of “The Hound Of The Baskervilles”, that provides an opportunity to explore every aspect of life on the moor, including a wonderful scene in which the men of the moor sing in harmony for Mary in the local inn. The plot also takes us back to Baskerville Hall, this time in the hands of an American, and shows us how times move on, even if the moor remains the same.

I enjoyed seeing Mary and Holmes working together, each understanding what the other would do and moving wordlessly to make it happen. Mary is no Watson, following where Holmes leads, she is an equal partner, trusted and depended upon.

There are two places where we get an insight into how this partnership works  In her first walk across the moor, Mary tells us that the atmosphere  was so spooky that:

“I might very well have heard the soft pad of the Baskerville hound behind me and felt its warm breath on the back of my neck. However, with Holmes beside me as a talisman, the spooks kept their distance and what might have been a place of animosity and danger was rendered merely desolate to the point of being grim.”

“Talisman”. What a wonderful word to describe one’s partner, summoning up trust and safety and power.

We get to see how Holmes views Mary, his advice to a young man looking for a woman is:

“You look around for a woman with brains and spirit. You’ll never be bored.”

Reading this book is like settling into a favourite armchair next to a fire: comforting and deeply relaxing.