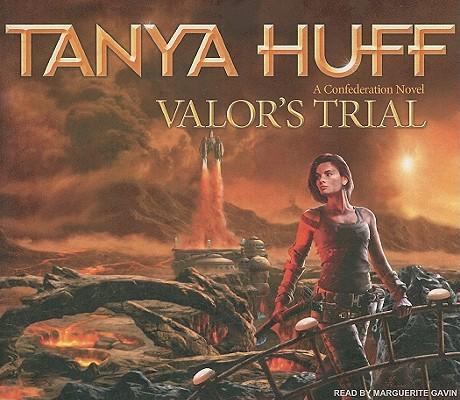 This series just keeps getting better. In her fourth book in the Confederation series, Tanya Huff pulls together the big picture that connects the four books into an original, unexpected and satisfying set of outcomes while continuing to deliver a tense thriller.

As with the previous books, “Valor’s Trial” is filled with acts courage, witty humour, gripping fight scenes and characters that I learned to care about. Yet Tanya Huff does not repeat herself. Her characters develop, the choices they make are unexpected and their situation keeps generating fresh challenges.

The newly promoted Gunnery Sergeant Torin Kerr is not quite the woman she was in the previous books. She’s still a Marine’s Marine, dedicated to achieving her mission and getting her people home, but her super-hero reputation is drawing an annoying amount of attention, she has doubts about the role of the Elder Races in continuing the war with The Others and she’s starting to think about life after the Core.

In “Valor’s Trial” Kerr finds herself a Prisoner War. This is a surprising development given that The Others don’t take prisoners. Confronted with a breakdown of Core values and a loss of fighting spirit among the prisoners, Kerr has to restore order and find a way for everyone to escape. What made the story so strong was that, in doing this, Kerr doesn’t take the most obvious choices, nor does she simply use force. She lives to her values and does whatever is necessary to uphold them.

I was impressed by Tanya Huff’s ability to imagine so many alien races and help me focus not just on what makes them different but how they work together. She pulls off the idea of a Marine Corp culture that integrates three races into something more than any of them could be alone.

There are many deaths in this book yet Tanya Huff is focused not on the body count but on making the death’s matter. She packs in the emotion and never gives in to the “kill first, think about it later” mindset.

The denouement is surprising and original but there’s nothing tricky or clever-clever about it. The groundwork for the big picture has been carefully laid in the previous books and the decisions Kerr makes are entirely consistent with who she is and what she values.

There is a fifth book in the series. Given the ending of the fourth book, I’m intrigued to see where the story will go. I’ve already downloaded it but I’m saving it for next. month.

Marguerite Gavin does a great job of narrating the book in a way that keeps the pace and the toughness while still delivering an emotional punch. Follow the link below to listen to a sample of her reading “Valor’s Trial”