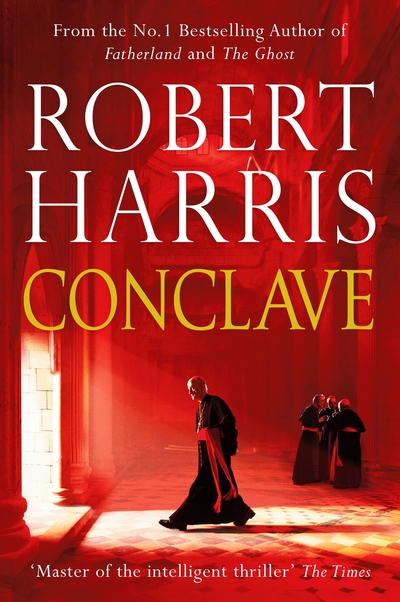 I think “Conclave” is the best Robert Harris book so far. He’s produced an empathic immersion into the closed world of the College of Cardinals, that manages to be compassionate, truthful and have just enough tension in it to keep you turning the pages while still having the people, rather than the plot, at the heart of the novel.

Set in the weeks after the unexpected death of what appears to be Pope Francis, the current Pope, “Conclave” tells the story of the election of next Pope by the 118 Cardinal Electors, sequestered in the Sistine Chapel until the Holy Spirit moves at least two thirds of to select one of their number to be Pope.

The story is told through the eyes of Cardinal Lomeli, Dean of the College of Cardinals and therefore responsible for managing the Conclave as well as voting in it.

Lomeli is a wonderful creation: a man who has served the Church mainly in ambassadorial roles as a Papal Nuncio and as Secretary of State, he is troubled by doubt and has recently found it difficult to pray. In his seventies, this Prince of the Church shows remarkable humility. His ambition is simply to run the Conclave in as neutral a way as possible so that God can guide him and his brother Cardinals to make the right decision.

Neutrality becomes a less and less viable goal as facts about some of the leading candidates emerge and Lomeli finds himself taking decisions about what to do with information that could directly alter who is chosen as Pope. In these circumstances, Lomeli’s guide seems always to be to do his duty to God. Of course, he would be greatly helped in this if God could be a little more directive about what his will is.

Lomeli kept a story human that could otherwise have been drowned in the procedural details of the conclave or overshadowed by an exploration of the divisions in the Church about women, homosexuality, Liberation Theology, the return of the Latin Mass, political and financial corruption, the continuing dominance of Italy in a world where most Catholics live outside of Europe.

I was a Catholic by birth and education, before taking a leap of faith and becoming an atheist, so I was intrigued to see how Robert Harris would treat the Church. I was pleased that he avoided both whitewash and demonisation. Instead, he presents men of many different backgrounds, personalities and beliefs, who are passionately trying to serve, even if some of them conflate service and ambition.

What I found most affecting and most realistic, was the extent to which these men, especially the much troubled Lomeli, found their way through the moral and political maze through prayer. I never mastered prayer but I’ve known people for whom it is a daily necessity on a par with food and water. I’d like to believe that many of those leading the Church feel the same need.

The audiobook version is narrated with great skill by Roy McMillan. Click on the Soundcloud link below for a sample.

4 thoughts on ““Conclave” by Robert Harris”