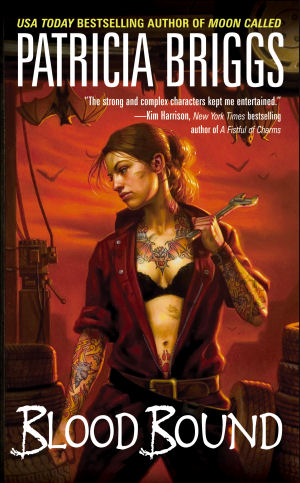 Mercy Thompson is becoming on of my favourite Urban Fantasy series, partly because Mercy herself is exceptionally likeable without being in the least bit saccharin and partly because the books can be read as entertaining adventure or as an extending insight into the complexity of dealing with abusive power from a position of weakness without becoming abusive yourself.

“Blood Bound” is the second Mercy Thompson book and follows straight on from “Moon Called”.

This time I read the ebook version as, for some obscure copyright reason, audible won’t sell me the audiobook version in Switzerland. To my surprise, I enjoyed getting back to text, which gave me more control over how I read and engaged my imagination less passively.

In “Blood Bound”, Mercy becomes more deeply involved with the local vampires and werewolves as they join forces to hunt down something truly evil that is preying on people in the area.

The plot is satisfyingly complex and generates lots of intriguing and original world-building material. The dialogue always work and there is enough humour to lift me out of the dark and keep me hopeful.

Those things would already make this an above average Urban Fantasy but what I enjoyed most was being in Mercy Thompson’s company and seeing her reaction to the, often violent and abusive, power structures she encounters amongst the vampires and the wolves.

What is it that makes Mercy good company? Well, she’s compassionate, generous and brave. She’s a motor mechanic with a degree in history and has the hardened hands and extended vocabulary to match.  Most of all, she accepts that she is responsible for her own choices. She makes no excuses for herself. She lives with the consequences and takes for granted that, if your choices make you who you are, then who you are should determined your choices. She is capable of great loyalty and yet strongly values her independence.

In this book, Mercy continues to navigate her way through the archaically male-dominated wolf pack power structure, which is based on dominance and submission, with a constant, involuntary, edge of violence, which the female werewolves often get the worst of. Mercy grew up with werewolves and deeply understand this structure. She has no expectation that it will change. She chooses not give herself up to these mores. She choose to prioritise personal power and responsibility over positional power and pack rules.but rather manipulates them whenever she can, to make things closer to how she thinks they should be.

The only place where she remains unclear on what to do is when she puzzles over whether giving in to a latent desire for sexual submission would be a surrender of independence.

Mercy also get more involved with the vampires, this time getting to meet with some of the people in their “menageries”. These are human members of the vampire household who are bound to them by blood and who serve as a kind of living larder.

I thought one of the most powerful sections in “Blood Bound” was when Mercy meets the people in Stephan’s menagerie, Mercy likes Stephan but she is not blind to his predatory nature. When she visits his household, I was impressed by her ability to see beyond the “human cattle” tag and see individual people making choices. Stephan, like all vampires, lives off his people but the choices he has made and the choices that the people in his menagerie make, go a long towards turning horrible abuse into a voluntary power exchange.

I’m hooked now. I’ve prescribed myself a diet of one Mercy Thompson book a month for the rest of this year.