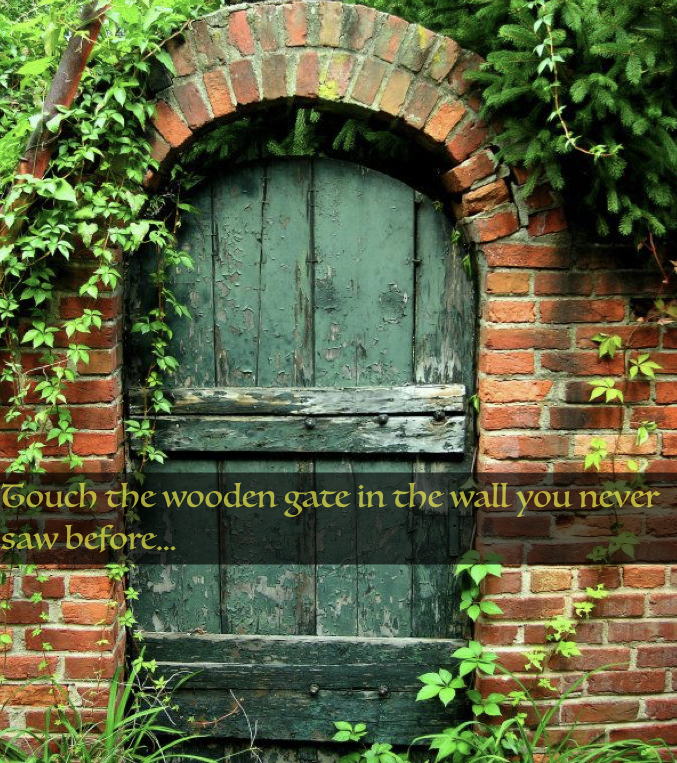 Sometimes, as with “Neverwhere”, I get Neil Gaiman’s work and sometimes, as with “The Ocean At The End Of The Lane”,  I feel like I’m the only one who can’t taste the secret ingredient that makes his work special.

Today, I read one of his poems, “Instructions” and found myself filled with excitement by the language and fully engaged with deciding what the poem means to me.

The poem opens with a calm voice giving clear, sparse but bizarre intructions:

“Touch the wooden gate in the wall you never
saw before.
Say “please” before you open the latch,
go through,
walk down the path.
A red metal imp hangs from the green-painted
front door,
as a knocker,
do not touch it; it will bite your fingers.
Walk through the house. Take nothing. Eat
nothing.
However, if any creature tells you that it hungers,
feed it.
If it tells you that it is dirty,
clean it.
If it cries to you that it hurts,
if you can,
ease its pain.

I don’t know who is being instructed or by whom but the Instructor sounds like a seasoned explorer advising a novice. The language is calmly imperative, allowing no dispute and offering no explanation. The imagery pulls me to fairytale quests. It suggests the presence of magical threats that require ritual responses to avoid conflict or ensnarement.

The goal the instructions are meant to help the person achieve is not clear to me but seems to be known to them. It’s a piece of knowledge I’m keen to share.

The next verse reads:

“From the back garden you will be able to see the
wild wood.
The deep well you walk past leads to Winter’s
realm;
there is another land at the bottom of it.
If you turn around here,
you can walk back, safely;
you will lose no face. I will think no less of you.”

The sense of a quest being taken up in worlds beyond our own is confirmed, but what am I to make of the offer to turn back with no loss of face? Is this genuine, perhaps parental concern for a loved-one facing mortal risks or is it the kind of ruthless manipulation of pride and need to please that the old use on the young to risk young blood to achieve old goals?

Personally, I have the kind of mind that sees Dumbledore as Harry Potter’s abuser and holds him responsible for creating and then mismanaging a mess that others have to die to clean up, so I tend not to trust the integrity of the statement just yet.

Then we get a lot “Do you get the reference?” advice on what to do with eagles, witches, giants and dragons.

“If an eagle gives you a feather, keep it safe.
Remember: that giants sleep too soundly; that
witches are often betrayed by their appetites;
dragons have one soft spot, somewhere, always;
hearts can be well-hidden,
and you betray them with your tongue.”

The last two lines seem like advice on dealing with new emotions and don’t quite fit with the “how to pick up points in D&D” feel of the others.

The next verse starts with an unexplained reference to the Instructee’s sister and then offers some verbally exuberant advice about not causing unintentional harm by what you say:

“Do not be jealous of your sister.
Know that diamonds and roses
are as uncomfortable when they tumble from
one’s lips as toads and frogs:
colder, too, and sharper, and they cut.”

Surprisingly, the rest of the verse reads a like a list from “Questing For Boys: how to use good manners to survive and triumph.“

“Remember your name.
Do not lose hope — what you seek will be found.
Trust ghosts. Trust those that you have helped
to help you in their turn.
Trust dreams.
Trust your heart, and trust your story.
When you come back, return the way you came.
Favors will be returned, debts will be repaid.
Do not forget your manners.
Do not look back.
Ride the wise eagle (you shall not fall).
Ride the silver fish (you will not drown).
Ride the grey wolf (hold tightly to his fur).”

Then we get to the shortest verse. It contains only seventeen words and is the only part of this 521-word poem that is in italics (yeah, I used the word counter: that’s how much this next verse got to me:

“There is a worm at the heart of the tower; that is
why it will not stand.”

So at this part, I’m lost. I’ve no idea what it means or why it is where it is. The eager-to-show-off nerd part of me immediately figured that the italics meant a quote and asked Google what it was a quote from. Google says it’s a quote from Neil Gaiman. Google’s helpful like that. The pre-internet part of my brain has vague memories of a sleazy Ken Russel film-version of Bram Stoker’s “The Lair Of The White Worm” and wants to go off and check the paperback copy I bought but have never opened. The I’m-too-old-for-this currently-in-charge part of me calls bullshit

What is Neil Gaiman trying to do here? Is he generating the question you’re supposed to ask him at book signings, to which he’ll reply, “Gotcha”? Is he making working for English Lit teachers across the world who have to try and sound like this quote makes sense? Is he off on some kind of T.S. Elliot-style use of an obscure personal reference that turns out to be central to the whole poem? Or is this still the Instructor cynically providing gnomic statements for the trusting Instructee to chew over?

But the last verse of the poem hooked me again.

“When you reach the little house, the place your
journey started,
you will recognize it, although it will seem
much smaller than you remember.
Walk up the path, and through the garden gate
you never saw before but once.
And then go home. Or make a home.
And rest.”

This brought me back to the Instructor’s intentions. Is this a version of Louise MacNeice’s “The Truisms” with the coffin-shaped box of things to know that can’t be taught? Is the Instructor suggesting that, when the quest is done, real-life can start? Is he hinting that the quest could be skipped?

I have no idea but the words are hooked into my imagination now, to be worried at, rejected or absorbed.

I guess that’s how you know it’s poetry.

3 thoughts on ““Instructions” by Neil Gaiman – what I get, what I hate and what I can’t let go of.”