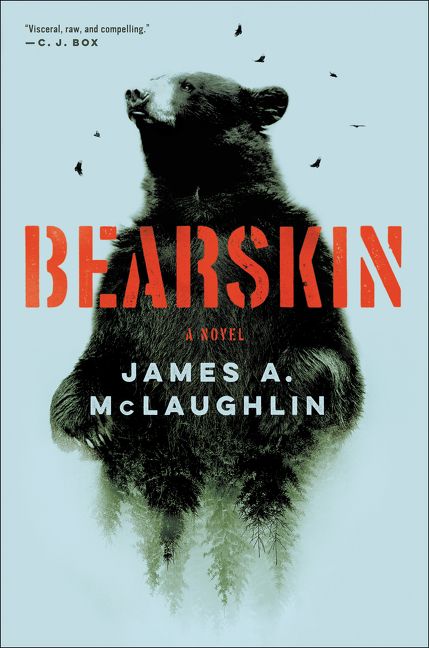 “Bearskin” is a rare find: a literary thriller that is as lyrical as it is muscular.

Instead of choosing between writing a literary book about how a man can surrender himself to the dark sentience of an ancient forest and walk out more himself than he was before or a thriller about a man deeply maimed by violence who, although living an almost invisible life in the wilds, knows his past will catch up with him, James McLaughlin has written a book that is both a literary achievement and a page-turning, viscerally realistic thriller.

Two things caught and kept my attention throughout this book: the development of Rice Moore, the man at the heart of the story and the sometimes total immersion into the ancient Appalachian forest. Either one would have been reason enough to read this book. Together they became compelling.

Rice Moore is a great creation. Recent acts of extreme violence against him and by him have left him emotionally scarred and subject to fugues states and hallucinations. A solitary man who no longer entirely trusts himself to play well with others, he seeks isolation, partly to hide from his enemies and partly to avoid people. Alone in the forest, feeling its pulse next to his own, his inability to let go of his territoriality or his instinct for violence, repeatedly draws him into conflict with the people around him.

Yet this isn’t a one-man-triumphs-against-the-world sort of story. Moore is losing his mind. His fugue states, his obsession with protecting the black bears on the estate he is warden of and his personal ghosts, lead him down a path where he literally puts on another skin and enters a different kind of consciousness. James McLaughlin’s ability to help me experience this altering of states as something real and raw was deeply impressive.

Even though “Bearskin” is as fast-paced and propulsive as a thriller needs to be, McLaughlin is able to incorporate the forest and its flora and fauna as a deeply experienced part of the story. Ecology is more than a plot device or a scientific concept here, it is about understanding our place in the world and its rhythms.

In addition to these two strong themes, McLaughlin gives us an insight into the poaching of black bears, the vengeance of the Mexican drug cartels and the rules and rituals of outlaw motorcycle clubs and an up-close experience of violence that is hard to look away from.

I recommend the audiobook version of “Bearskin” as MacLeod Andrews’ narration enhanced my experience of the book.

Click on the SoundCloud link below to hear a sample.

4 thoughts on ““Bearskin” by James A. McLaughlin – Highly Recommended”