This year I decided to tackle my TBR pile by reading thirty books from it that are the first in a series and assess my eagerness to read the rest of the series in terms of Yes / Probably / Maybe / No.

As I got into the task, I found that I was reading a lot for First in a Series books that weren’t on my original list so I tracked them as well.

In August and September, I read ten “first in a series” books, only one of which was on my original list of thirty.

Half of the first in a series books that I read are ones that I want to read more of, so I’m going to focus this post on them.

I came late to “The Fifth Season” It’s been sitting on my shelves since 2016 and now I’m kicking myself for not having read it earlier. Still, that does mean that the rest of the series is available for me to read in the coming months.

“The Fifth Season” is Science Fiction at its best. It manages to tackle big themes: the evil of slavery, the ruthlessness of empires, the hunger for freedom and the persistence of hope, while keeping the focus on people rather than philosophical discussion, geopolitics or technology. These are real people, not always likeable, deeply fallible, cruelly twisted by the world they live in, who nevertheless persist. They continue. They strive. They take love where they can find it. They expect little and they hope less but they cannot bring themselves to give up.

“The Thousand Dollar Tanline” is a Veronica Mars novel. I’ve never read of novel-of-the-show before. I was surprised at how well it worked. Of course, that might be because I’m filling in all the blanks in the text with memories of the show but mostly I think it’s because the writing is smooth and fast and carried me along.

In this story, the now grown-up Veronica is investigating the disappearance of a young girl spending Spring Break at Neptune.

The start of the story is high-grade neo-noir. Then it gets personal.

The main difference with grown-up Veronica (and perhaps with the novel format) is how clearly Veronica sees the girl who has gone missing and the effect of her disappearance on others. It snapped me out of slick, witty, neo-noir and into something much more human.

“The Murder At The Vicarage” is the first Miss Marple book. I’ve seen her in films and TV series but I’ve never read the novels. I was delighted with this book and immediately became a fan

“The Murder At The Vicarage” is a sparkling virtual locked room mystery, filled with benevolent humour and illuminated by the first appearance of the formidable Miss Marple..

For me, what made the book a classic was the way in Agatha Christie structured her novel. Where another author might have been satisfied with weaving sturdy broadcloth from the interaction of characters and circumstance to set up a mystery, Christie creates an intricate piece of lace from the first page, filled with patterns and motifs and fine detail carefully arranged.

“Cinder” was a lot more exciting than I expected it to be. I mean, it’s a retelling of Cinderella, so I expected it to swing between the bloody revenge in the Grimm version to the cute “what a nice fairy godmother” of the Disney version- . an affirmation of the Patriarchy. Handsome Prince rescues poor but worthy girl. How exciting could that be?

Except this re-imagining changes the dynamic. Cinder isn’t waiting to be rescued. The Prince IS charming in cute but charismatic and self-deprecatingly egalitarian way. Then there’s the evil Queen – far more evil than any stepmother, And there’s the plague and the death it brings and cyborg stigma and and and.

I found myself staying up late into the night to find out what happened next .Eventually, even though the Prince was in danger and Cinder was in motion to do… something, probably something brave and unpredictable, I HAD to get some sleep but I stole time the next day to finish the book,

“The Devil’s Revolver” was an exciting Weird West adventure that sarted at 100mph and didn’t let up.  Two chapters in, I was already hooked.

There’re enough things here that are familiar from Westerns that you slide into the world easy but enough that’s different or unknown that your curiosity stirs itself, sniffs the air and says “Feed me.”

The protagonist, Hettie Alabama is an easy to like seventeen-year-old girl with grit and a tomboy attitude. The baddies deserve to die. And there’s a shadow of menace that I could feel from the start.

I’ll be back for the rest of this Wild-West-With-Magic series.

In the first nine months of the Reading Challenge, I’ve read twenty-one of the thirty books I’d selected and another twenty-four that I picked up as I went along.

So far I’ve found twenty-five series that I would like to read more of. In the meantime, I’ve already read further books in six of the series. When I wrap up the Challenge, I’m going to priortise which of the series I most want to read. 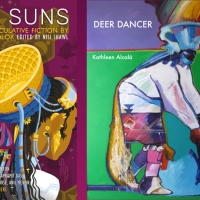