This week, I’m looking for a varied diet in my reading, to keep me turning the digital pages during the monotonous Lockdown days.

‘The Grace Year’ by Kim Liggett (2019), offers me a dystopian thriller that seems both original and timely.

‘Thereby Hangs A Tail’ by Spencer Quinn (2009) offers me a smile and an opportunity to see the world from a dog’s point of view. ‘

The Shadow Of The Wind’ by Carlos Ruiz Zafón (2011) is a promising mix of mystery and old bookshops, set in Barcelona in 1945.

The opening of the ‘The Grace Year’ is irresistible:

‘No one speaks of The Grace Year. It’s forbidden. We’re told we have the power to lure grown men from their beds, make boys lose their minds and make the wives mad with jealousy. They believe our very skin emits a powerful aphrodisiac, the potent essence of youth, of a girl on the edge of womanhood. That’s why we’re banished for our sixteenth year, to release our magic into the wild before we are allowed to return to civilisation.

Speaking of The Grace Year is forbidden but it hasn’t stopped me from searching for clues. A slip of the tongue between lovers in the meadow. A frightening bedtime story that doesn’t feel like a story at all. Knowing glances nestled in the frosty hollows between pleasantries of the the women at the market.

But they give away nothing.

The truth about The Grace Year, what happens during that shadow year, is hidden away in the tiny slivers of filament hovering around them when they think no-one’s watching. But I’m alsways watching. The slip of a shawl, scarred shoulders bared under a harvest moon, haunted fingertips skimming the pond watching the ripples fade to black, their eyes a million miles away. In wonderment? In horror?

I used to think that was my magic, having the power to see things others couldn’t, things they didn’t even want to admit to themselves. but all you have to do is open your eyes. My eyes are wide open.’

This is an invitation to all of us to open our eyes and see the things we don’t want to admit to.

Now I really want to know what The Grace Year is and why it is and if she survives it. I think I’m in for a good thriller as well as a provocative piece of speculative fiction

I first met Chet and Bernie, the dog and human team that make up The Little Detective Agency, in ‘Dog On it’. I had a great time. I was impressed by Spencer Quinn’s humour and by his ability to tell a detective story from the point of view of a very believable dog who has a tendency to forget details like why they’re chasing someone but will always remember anywhere with a good smell or the possibility of food.

I listened to the audiobook version of the first book and I’d have liked to have read the rest of the series that way, but no audiobook version is available in the UK so I’m trying ‘Thereby Hangs A Tail’ as an ebook and hoping that the humour still comes across as strongly.

This time, Chet and Bernie are hired as bodyguards to ‘Princess’, a yappy little star of the dog show circuit. Chet is not a dog show kind of dog, so this is likely to go very wrong very early on.

‘The Shadow Of The Wind’, by Carlos Ruiz Zafón is the first book in ‘The Cemetery of Forgotten Books’ trilogoy. The book was originally written in Spanish so I’m hoping to benefit from a non-Anglo view of the world.

The labyrinthine library of obscure books, knowns at the ‘cemetery of lost books’ is hidden in the old city of Barcelona. When ten-year-old Daniel is given access to the library in 1945, he begins a long journey hunting for books by Julian Carax, author of ‘The Shadow Of The Wind’, books someone is trying to destroy every copy of.

Based on the reviews I’ve read, I’m expecting puzzles within puzzles, eccentric characters, a period setting and a pace that keeps me turning the pages. 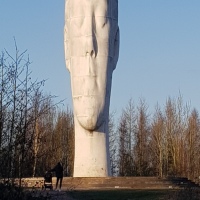