This week, I’m heading off into Fantasy with a capital F. I’ve picked only two books but, between them, they are almost a thousand pages long. The first one is from an author whose horror fiction I enjoyed but whose Sword and Sorcery stuff I’ll be reading for the first time. The other is a roll of the dice – a new author, a debut novel, a unique set of themes and players. On the plus side, it won the Locus Award for Best First Novel. Both books are the first books in a series.

I’m hoping to escape to somewhere new, to be entertained and to want to go back.

‘The Blacktongue Thief’ by Christopher Buehlman (2021)

I read my first Christophe Buehlman book, ‘The Lesser Dead’ in March this year and was so impressed that I pre-ordered his next book… which turned out to be about something entirely different. Goodbye unreliable vampires under the streets 1970s New York City and welcome to a slightly tongue-in-cheek riff on a sword and sorcery quest featuring Kinch, a not-always-successful thief as the main character. He’s more famous for his drinking, his storytelling and his foul mouth than for his martial skills.

I liked the way the folks at Den of Geek put it:

‘Kinch welcomes readers straight into a world where humanity was nearly destroyed by goblins, and where giants are encroaching on the northern border. But besides all that, a person’s got to make a living, and Kinch has a debt to the Takers Guild he’s bound to pay off. Kinch tells the story like he’s sitting next to you at a table in the pub, sharing the worst and best moments with a lingering delight at the sheer telling of the tale. He exaggerates and lies, but lets you know he’s doing so with a wink and a nudge.’

This isn’t as much a departure for Christopher Buehlmann, poet and writer of horror novels, as it might seem as he’s also a sought-after performer at Renaissance Festival where he does a comedy act as Christophe the Insultor, Verbal Mercenary.

I’ve bought the audiobook version of ‘The Blacktongue Thief’ which is narrated by the author and I’m eager to hear his performance.

I’m hoping for something that makes me laugh and also carries me along on an adventure filled with wild and improbable things.

‘Gideon The Ninth’ was everywhere in 2019. It had an unforgettable cover. Bookpage described it as ‘The gay goth space opera of our dreams’. And I hesitated. Hype does that to me. Then it won the 2020 Locus Award for Best First Novel. Then the next book, ‘Harrow The Ninth’ came out and I saw lots of fans going wild for it so I caved and bought a copy a couple of months ago.

I’ve found that longer books (this one is 448 pages) tend to lurk at the bottom of my TBR pile until I go looking for them. Giving myself a Fantasy Fest Week prompted me to pull this to the top of the pile and find out if the hype is deserved.

Some of the noise about this book centres on the fact that the two main characters are gay. I’m more interested in the fact that they’re both necromancers with a really creepy kind of magic at their fingertips and they live in a world that sounds Byzantine in its complexity and they’re constantly having to fight for their lives. I’m fine with the characters being gay but it’s hardly big news. Tanya Huff’s been writing gay characters in fantasy and science fiction for decades. What matters to me is getting a good fit between characters and plot.

I liked Tasmyn Muir’s response when Bookpage asked her if she saw the book as a romance.

“…while I would definitely not characterize Gideon the Ninth as a romance, its romantic elements are incredibly important to the whole thing. Gideon and Harrow’s romantic feelings for various people are crucial to the story, and have been ever since I thought it up. It wasn’t that I started writing a thriller and then thought “Hmm, actually, what if the main character had a crush . . .” The book is in a very real sense about who feels what about whom. It’s just hard for them to work out what those feelings are, because they keep having to fight duels and solve bone puzzles instead of actually talking about anything.”

I’m hoping for something original, engaging and filled with dark imagery delivered with dark humour. 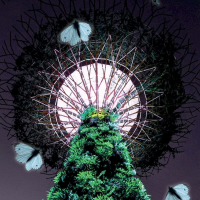