The State Of My Bingo Card

It’s the start of Week Seven of Halloween Bingo. The good news is that I now have two bingos.

With eighteen days left in the game, I have six books to complete, including two I’m already partway through, so a Blackout Bingo should be possible.

So, on with this week’s books…

This week’s Halloween Bingo reads are two books that I’ve been looking forward to for a while now. One which I’d pre-ordered long before it was published last month. The other is a book by I writer I admire that I’ve saving for Halloween Bingo. One is a book about professional killers fighting for their lives, the other is about stopping the demons who are running the KKK. Both books have been laced with humour without being turned into something cosy.

‘Killers Of A Certain Age’ is a bit of a gamble. I bought it before it was published. The only other book I’ve read by Deanna Raybourne was ‘A Curious Beginning’, the first book in her Veronica Speedwell series of Victorian mysteries. I thought that was great fun but it’s very different from writing a contemporary novel.

I’m aware that ‘Killers Of A Certain Age’ is very much on trend, feeding babyboomers books about themselves and trying to ride the success of ‘The Thursday Murder Club’, ‘An Elderly Lady Is Up To No Good’ and ‘The Marlow Murder Club’.

If it works, it will be a fun read. If it’s anything like the poorly conceived ‘Death In The Sunshine’, I won’t make it to the end. I’ve decided to travel in hope.

Includes any book that involves espionage or assassins.

‘Ring Shout’ is a novel I know I’m going to enjoy. I’ve been following P. Djéli Clark since I read his novella ‘The Black God’s Drums’ and everything he’s written has worked for me.

I loved watching him develop his stories set in an alternative early twentieth-century Cairo starting with two novellas and then delivering a stunning novel His characters are flamboyant, diverse and full of energy. His plots are twisty and clever. His world-building is visually stunning, using Middle-Eastern myth and culture to create a Djinn-powered Steampunk version of history.

In ‘Ring Shout’, he gets much closer to home, in terms of time and space, imagining the Ku Klux Klan white supremacist terrorist organisation as being run by demons. To some of us, that may not seem like much of a stretch but that just make me even more eager to see these guys get what they deserve.

Any book involving demons, demonic possession or other such elements, as well as hell, hellhounds or the devil, or, alternatively, travel gone very, very bad. And, since Charon hails from Greek mythology, you could also read a book that includes elements of Greek mythology for this square 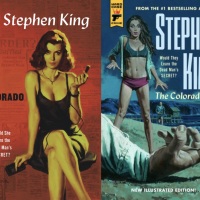