When it was first published, ten years ago, “Raven Black” was an award-winning book that was seen as breaking new ground in crime fiction by virtue  of evoking the atmosphere of the (almost crime-free) Shetlands and creating a more-than-typically reflective, low key but passionate, main character in the form of Fair Isle born Jimmy Perez.

Since then, it’s spawned another six books (the most recent of which, “Cold Earth” was published last month), and a TV series that is on its second season.

It seemed to me that I was probably missing something, so I decided to take a look.

“Raven Black” tells the story of the investigation of the murder of a teenage girl who is found in the snow on the Shetland hills, not far from her home, apparently strangled with her own long red scarf.

What I liked most about the book was Ann Cleaves ability to write from the point of view of multiple characters in the story. This means that, although Jimmy Perez is the actor who moves the puzzle-solving part of the plot along, his is not the only, or even the main, perspective we get. We see the world through the confused and often frightened eyes of an old man who has been ostracised by the rest of the Islanders and is seen as the natural prime suspect for the murder; through the  artistic eyes of a young mother, trying to raise her daughter alone after a divorce and seeking solace, safety and artistic inspiration in the beauty of the island; through the eyes of the murdered girl’s best friend, who has no friends, is disconnected from her parents and is infatuated with the local rich bad-boy.

Jimmy Perez is a rare thing in fiction, a detective who doesn’t let his ego get in the way of his job and who listens carefully to everyone who talks to him.

“Raven Black” lives up to its subtitle as “A Thriller”. I wanted to know what was going to happen next and I was kept guessing right to the very end of the novel.

It was an entertaining read that has “make me into television” punched through like the words in a stick of Brighton rock but it was perhaps a little underwritten in terms of capturing the scenery of the Shetlands and the feel of the big winter festival. I needed a little more to move me on from “what an intriguing puzzle” to “what a strange place and what interesting people”.

Still, there was more than enough there to raise “Raven Black” about the average and I will be back for the next in the series. 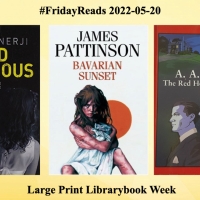