Set in 2016 Post-Brexit vote Britain, “Autumn” revolves around the experiences of a young art historian and the old man who helped her learn to see and think when she was a child. The story moves up and down the timeline of both their lives and flips from strange, presumably allegorical, dream sequences, through discussions of art and imagination and freedom through to hyper-real depictions of the modern life.

The opening chapter is an allegorical dream sequence that screams the literary equivalent of college band concept album and was almost enough to make me stop reading, yet the next chapter got my complete attention.with a sequence about going into to use the “Quick Check” passport service in the ruined post offices our governments have created as they’ve pillaged public assets. Ali Smith makes this familiar activity fresh by a muted rage that clings to irony and comic observation as it hangs above the pit of despair that life in a totalitarian state produces.

“Autumn” is a book you have to engage with rather than glide through. It’s a conversation with the reader rather than an entertainment. For the most part, it was a conversation that I took a lot of pleasure in but there were some parts, dream sequences, long lists of how Brexit split the nation, where I felt as if I wandered into the “Time Passes” section of “To The Lighthouse”: I knew I was reading something bold and innovative but it didn’t really engage me. 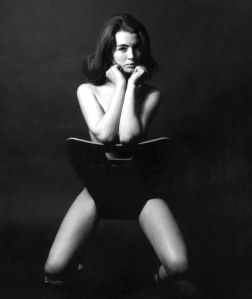 Iconic picture of Christine Keeler after the Profumo Affair

“Autumn” made me re-examine what I thought I knew about the allegedly swinging sixties in England. I was four in 1960 and I realised it’s a period that I’ve never really examined from an adult point of view. I grew up being aware of things referred to in “Autumn” like Christine Keeler and the Profumo Affair,  and (at the time) risqué movies like “Alfie” but had no real understanding of them. They were too recent and too long ago.

I came to British Pop Art much later, so I thought I’d be on firmer ground but I was completely unaware of the work of Pauline Boty, who features heavily in the book and who Ali Smith examined in a piece in the Guardian.  Seeing pop art through the eyes of Ali Smith’s characters made me hungry for it, even though most of it normally slides past me.

This is a book of big themes and real people. It explores the relationship between memory and imagination and how they compete and cooperate to construct and sustain the story of our lives that we tell to ourselves and others. It’s about seeing past the obvious to the real. It’s about a bloody-minded refusal to give in to all the people and institutions that try to make us live smaller lives. It’s about borders and crossing them or being kept out. It’s about triumphing by finding a way to express joy.
This was my first Ali Smith book. It wasn’t always an easy experience but it was a memorable one. “Autumn” is the first of a four-novel seasonal sequence covering how the contemporaneous relates to the diachronic. I will be back for the rest.

The first link below is an extract from the audiobook. The second link is Ali Smith talking about “Autumn” to the TLS: