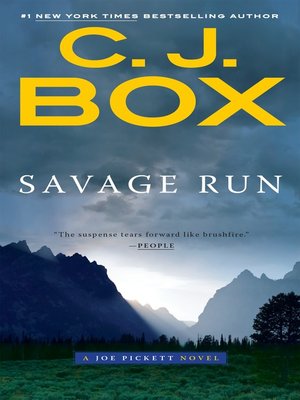 The book opens with a high profile eco-warrior falling prey to assassination by exploding cow. The blast takes place in a National Park Forest that is leased to cattle ranchers and Joe is called in to assist in the investigation before it is clear that either cattle or humans are involved.

What follows is a small range war in which two assassins target various prominent eco-campaigners. Despite the fact that these deaths are vicious, cold-blooded and designed to be humiliating, this remains a fairly low-key book. Perhaps this is a reflection of the character of Joe Pickett. He’s a principled man who believes in doing his job honestly and competently and holding everyone equally to account, regardless of their wealth and influence but he is neither a campaigner nor an avenger. He just does what he needs to do.

What I liked most about this book was the irrepressible personality of the constantly-monologuing-but-still-dryly-amusing death-by-cow eco-warrior. His stamina stretched belief a little but his charisma compensated for that.

I also liked the way Joe’s wife, Marybeth, who suffered such trauma in “Open Season” comes into her own and drives the plot along.

This series is turning into a slow-cook, gentle delight, with the plot being subordinate to an understanding of a way of life and the values that support it.