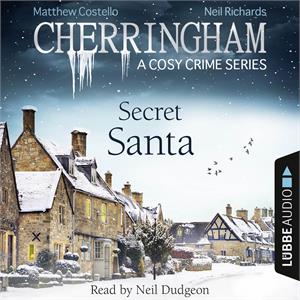 I’ve just discovered the Cherringham cosy crime series which is made up of novellas released every couple of weeks.

It’s set in a village in the English Cotswolds and features a pair of amateur sleuths: Sarah Edwards a web designer, who has moved back to Cherringham with her two children after her divorce and Jack Brennan, former NYPD detective who, together with his dog Riley, lives on a canal boat in Cherringham in honour of his dead wife’s long-cherished plan to retire to the UK.

I dived in at #25 because I needed something short and Christmas themed that my wife and I could listen to in the car. Something 170 minutes long that deals with Santa going missing just before he’s scheduled to turn on the Cherringham Christmas lights seemed a good fit. When I saw it was narrated by Neil Dudgeon who plays my favourite Inspector Barnaby in the most recent seasons of “Midsomer Murders”. it became ideal.

It lived up to my expectations, providing a light but crunchy plot with a soft feel-good centre that wasn’t too sweet. Neil Dudgeon gets all the accents right. The pace worked well and it didn’t matter that I’d missed the first twenty-four episodes.

At first, I was surprised to find that no US/UK cultural clangers were dropped. Then I looked up the authors and learned that Neil Richards is a Brit scriptwriter and producer and Matt Costello is an American scriptwriter based in NYC and they’ve been writing TV scripts together since the late 1990s.

I’ll be going back to Cherringham regularly for small slices of entertainment. I’ve bought the first two compilation books which cover the first six novellas.